Science and Innovation Awards for Young People in Agriculture

Each year the Department of Agriculture with its Award partners presents the Science and Innovation Awards for Young People in Agriculture - a competitive grants program that provides funding for innovative research projects that will benefit Australia's agricultural industries.

The awards are coordinated by the Australian Bureau of Agricultural and Resource Economics and Sciences (ABARES) and are open to young people who are working or studying in rural industries. AWI is a partner and supports the Award.

The Science Awards encourage young scientists, researchers, innovators and others active in the agriculture sector who have an original and innovative project that will contribute to the ongoing success and sustainability of Australia’s agriculture, fisheries and forestry industries. The Science Awards have already helped 250 young Australians make their ideas a reality and showcase their talent to the world.

The Science and Innovation Awards for Young People in Agriculture aim to:

I’m always trying to align the research with an actual industry need.

Science and Innovation Awards for Young People in Agriculture

For more information and to apply visit the ABARES website.

A dislike for fencing on his family farm in Henty inspired Hugh McKay to develop an automatic fencing trailer. It’s a project inspired by hours spent fencing on hot days.

“I always thought it was a very slow, tedious process, moving back and forth up the fence a number of times,” Hugh says. “It’s probably my least favourite thing to do on the farm, especially in the middle of summer. A lot of effort goes into it and, at the end of the day, if you’ve done 200 metres, that’s a good day’s work.”

Hugh studied product design and engineering at Swinburne University, and previously worked for Adshel in Melbourne. In need of a break, and with his parents glad of an extra pair of hands during the drought, he returned to the family farm a year ago. But he couldn’t help applying his product design background to the fencing trailer.

Using the Smart Fencer trailer begins with placing your phone or controller where you want the fence to start and end. The system calculates how many posts to load up, depending on post spacing, length and distance.

“Once you’ve got all your posts in the machine and your wire spinner’s set up, then you just drive to the beginning of the fence” Hugh says. “It’ll pull the fence posts out individually, bang them into the ground, tell you to go forward and build the fence as you drive along.”

The Science and Innovation Award project will help Hugh develop a working prototype of his trailer and hopefully get it into production. He estimates that investing in a fencing trailer would pay off within a few years for an average farm, and greatly reduce the time and labour needed for fencing.

Dr Jamie Barwick, a precision agriculture lecturer at the University of New England, is developing a way to automatically pick up parasites by monitoring changes in sheep behaviour.

His Science and Innovation Award project will use motion sensors and GPS trackers attached to the animals to detect changes in activity and movement.

Ultimately Jamie wants to develop a behaviour prediction algorithm that can act as an early warning system for animals showing signs of declining health, leading to earlier detection and intervention before clinical disease becomes apparent.

The cost of internal parasites to the Australian sheep and wool industry is more than $430 million annually which, after neonatal mortalities, is the highest animal health cost the industry faces. If it works, Jamie’s idea could be of real benefit to farmers.

“I’m always trying to align the research with an actual industry need,” he says. “If we can actually do it and a farmer can get an early indication of animals that are becoming unwell, I know that’s going to be really valuable.”

Read more about the project in Beyond the Bale.

Research into the genetic variation within the sheep blowfly Lucilia cuprina in Australia is under way, thanks to an AWI-supported grant that aims to provide ammunition for the wool industry in its battle to protect the nation’s sheep flock from flystrike.
The research is being undertaken by 30-year-old Dr Clare Anstead, a lecturer in parasitology in the Faculty of Veterinary & Agricultural Sciences at the University of Melbourne, who was presented with a Science and Innovation Award for Young People in Agriculture in March 2017.

Dr Anstead was the lead researcher on the project that in 2015 completed the identification of all 14,554 genes that make up the sheep blowfly. That project, co-funded by AWI, to decode the sheep blowfly genome discovered around 2,000 genes not seen before in any other organism. Some of these ‘orphan’ genes hold the key to the parasitic relationship between the blowfly and the sheep, and could be targeted to develop a completely new method of flystrike control.

The new project supported by the AWI-funded Science and Innovation Award aims to build on this previous research by using genomic and related information to investigate genetic variation within the Australian sheep blowfly.

Approximately 100 adult blowflies (50 females and 50 males) will be collected for analysis from infected sheep and their surrounding environment, from each of ten disparate locations across Australia.

Dr Anstead says insights into the population genetics of the blowfly are critically important to provide a basis for the identification of key target genes that could be used in the design of new ways to combat the parasite.

Read more about the project in Beyond the Bale

2016 recipient of the Australian Wool Innovation Award - Amy Lockwood
Amy is set to investigate if unmanned aerial vehicles can be used to improve lamb survival by increasing the frequency of monitoring while minimising disturbance to lambing ewes. “The project is looking at ways to improve lamb survival through understanding ewe and lamb behaviour,” she says. “We’re also better utilising technologies that are available on the farm to pote...

Amy is set to investigate if unmanned aerial vehicles can be used to improve lamb survival by increasing the frequency of monitoring while minimising disturbance to lambing ewes.

“The project is looking at ways to improve lamb survival through understanding ewe and lamb behaviour,” she says. “We’re also better utilising technologies that are available on the farm to potentially improve efficiency and productivity.”

In Australia one in four lambs die before weaning, with survival rates particularly poor in Merino sheep and when ewes give birth to twins.

This mortality rate comes at a huge economic cost, with estimates that improving the survival of single lambs by 15 per cent and twins by 30 per cent would deliver returns to the industry of $285 million and $515 million respectively.

“This can result in disturbances to natural ewe and lamb behaviour and can potentially cause impacts on lamb mortality,” she says.

On the other hand smart technology such as drones could cover 30 hectares or more, checking food, water and fences as well as the behaviour between ewes and lambs after birth.

This is particularly important in the first three days following delivery, when more than 80 per cent of lamb mortalities occur.

Amy was born in the regional town of Albany and spent a lot of time on farms growing up.

“I’ve really enjoyed the livestock side of things from a young age, which is where my passion has come from,” she says.

Read more about the project in Beyond the Bale

Research into an innovative use of technology to help woolgrowers protect their flocks from wild dog attacks is under way. The research will be undertaken by 34 year old Dr Greg Falzon, a lecturer in computational science at the University of New England in Armidale, who is the 2015 recipient of the AWI-supported Science and Innovation Award for Young People in Agriculture.

The project will research and develop a 'listening station' device – the Electronic Shepherd – to detect the presence of wild dogs and attacks on stock and then send an alert to the woolgrower's mobile phone, giving the woolgrower the opportunity to intervene and disrupt an attack and discourage future attacks. The aim ultimately is to reduce stock losses and costs.

Dr Falzon says technologies used to combat wild dogs in Australia have largely remained unchanged since the 1950s, but new and innovative solutions could help address the issue.

"If sheep producers could reliably detect dog attacks as they are occurring or just prior to an attack, at any hour and at even the most distant locations of their property, then there could be an opportunity to thwart a dog attack," he said. "Early warning technology could allow woolgrowers and sheep producers to take the initiative back from the dogs and allow them to protect their stock."

The Electronic Shepherd system will include a listening station, placed in the paddock close to the flock, continually listening to the surrounding environment and monitoring the flock as it goes about its daily activities.

"Sophisticated real-time embedded signal processing software and algorithms would automatically detect the presence of predators, such as a dog bark, or an attack on the flock indicated by extensive bleating or sheep running. On board processors would relay an alert signal and location to the woolgrower via the mobile network or, if not available, via long range radio link."

Fifth generation Longreach farmer and Nuffield scholar James Walker wants nothing more than to revolutionise livestock management in Australian agriculture... one sheep at a time.

Sheep will be fitted with National Livestock Identification Scheme (NLIS) Radio Frequency Identification Devices (RFID) ear tags. A scanner will be installed at the entrance to water points and each sheep will be logged as it passes the scanner - effectively monitoring when each sheep entered the water point, how long it spent there and the order of arrival.

"This data may provide an insight into flock dynamics and rank individuals on their feeding efficiencies... it may also identify weak or lame sheep, sheep that have a lamb and high performers," says James.

James also plans to fit sheep with accelerometers (like pedometers) to track the number of steps they take, a proxy for how much energy the animals are using and how far they travel to find food. Portable scales and condition scoring will complement the new technology and allow producers to expertly assess feed requirements and availability to optimise both animal welfare and productivity.

The accelerometers will also record speed to help establish whether a sheep has been chased by a predator. If so, an alert will be sent to base the next time that sheep passes the scanner. The system will be linked to a computerised accounting system that can be used to optimize financial outcomes. 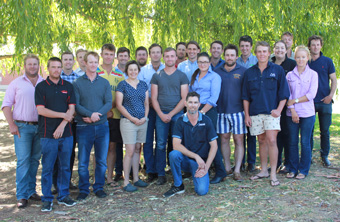 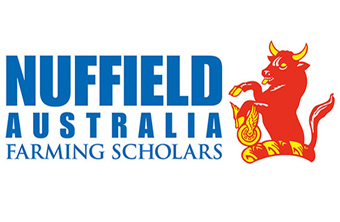 Nuffield Farming Scholarship
The scholarship is a unique opportunity for a woolgrower to study a particular subject of interest and increase practical farming knowledge and management skills and techniques in the Australian wool industry. Read more