The shearers in the trial wore sensors that enabled the researchers to monitor the motion and the muscle activities of the shearers in a real-life setting.

Pioneering high-tech research into shearers’ muscle fatigue has identified several important features that could provide an early warning of lower back injuries. The research, undertaken by the University of Melbourne with funding from AWI, could also be used to evaluate the effectiveness of future injury-prevention strategies.

Attracting and retaining shearers is one of the biggest challenges facing woolgrowers and the industry. A major factor is that shearing can be a ‘back-breaking’ profession, with injuries to shearers being six times the all-industry average in Australia. Back injuries are the most significant due to their long rehabilitation time and associated lost productivity contributing to 50% of shearing injury costs.

AWI Program Manager for Farm Automation & Reproduction, Carolina Diaz, says a project funded by AWI has been examining exactly how back-related injuries arise – which is proving useful for the development of new strategies to reduce the risk of shearing injuries.

“These future strategies include wearable sensors that alert a shearer to when they are getting prone to injury, through to more interventionist assistance such as wearable robotic solutions that reduce the risk of injury while still allowing the high degree of maneuverability required for shearing,” Carolina said.

“However, the initial objective of the project has been to accurately identify the mechanisms of lower back musculoskeletal injuries in shearers.

“Researchers from the University of Melbourne’s robotics team monitored Electromyography (EMG) signals from sensors placed on a range of shearers, in combination with a motion capture system, to measure and study their back muscles and posture during the day.

“Recruited for the study were ten shearers aged between 21 and 61 years with varying levels of skill, from two weeks experience to more than 40 years. The study was undertaken in real shearing sheds (rather than a laboratory), in three different states.

“The shearers were monitored in authentic shearing conditions and across full workdays to reflect realistic workloads. This enabled the researchers to capture the effect of prolonged muscle fatigue, which is recognised as a precursor to injuries during shearing.”

The most common time of injury for shearers is between the hours of 4pm and 6pm, late in the shearing day, indicating a high correlation to the level of fatigue.

The project was the idea of PhD student Mark Robinson who is studying human-robot interaction at the University of Melbourne. Through family connections, Mark knew about the high risk of injuries to shearers, and realised that robotics might be part of a solution.

The project was undertaken by Mark and other members of the University’s robotics team which included Associate Professor Denny Oetomo, Professor Ying Tan and Professor Chris Manzie.

This graph shows one of the many variables measured during the shearing exercise, in this case the muscle activation signal for one of the lower back muscles. Stronger signals imply stronger muscle capabilities – the left-hand axis. Each dot represents the average value of the muscle activation during the shearing of one sheep. The plot above shows the trend across the 250 sheep shorn during a day.

An interesting and compelling trend can be seen corresponding to the shearing and rest cycles. Spikes in the muscle activations can be seen after each break time (coffee breaks, lunch break) followed by a decreasing trend. Furthermore, the recovery after each break also diminishes during the day, as the muscles become more fatigued.

After the collection of in-shed data, the information was processed by the University of Melbourne researchers to search for potential features of muscle activity and posture that correlated with the risk of injury, across all the shearers.

“Several important features of muscle activity were identified which, if monitored continuously, allow for the prediction or early warning of lower back injuries among shearers,” Mark said.

“With this knowledge, we developed a prototype ‘sensing unit’ in a back-stabilising belt that can be worn by shearers to alert them (via a display on a smartphone) when they are becoming vulnerable to potential injuries and which can propose optimal resting cycles.

“Having identified the variables most effective as predictors to injury risk, the protype unit incorporates sensors in only the most optimum locations, which helps the unit be practical, cost-effective and suitable for shearers to wear.”

THE CAUSE OF CATCH-AND-DRAG INJURIES

Mark said the researchers’ acquisition of new data about injury risk uncovered interesting findings that help our understanding of how and when injuries occur.

“The forces typically encountered during catch-and-drag are usually well within the capability of a typical human (shearer’s) body to withstand safely. It is the stooping posture during shearing that creates muscle fatigue during shearing and a noticeable stretch to the passive muscle length. This stretch means that there is a ‘slack’ in the lower back muscle that affects its ability to stabilise and hold our spine and trunk.

Mark says the important indicators of muscle activity that they have identified can also be used to measure the effectiveness of future physical intervention strategies introduced into the sheep shearing process.

“This could include strategies such as ergonomic shed redesign, changes in warm-up and stretching exercises, and changes in the rest-work cycle. However, it could also result in a more active solution such as an electromechanical version of the shearing harness, or even an exoskeleton that the shearer could wear, which would provide physical assistance to the shearer through the use of robotics.”

Further research is needed into the development of these prototypes. Given that shearers are paid by the number of sheep shorn per day, the researchers are aware that any proposed new safety solutions should minimise any disruption to the shearer’s mobility and shearing speed. Furthermore, the fact that shearers travel to many different properties for work and utilise woolgrowers’ infrastructure needs to be considered in the development of potential injury-mitigation solutions

This article appeared in the September 2020 edition of AWI’s Beyond the Bale magazine. Reproduction of the article is encouraged, however prior permission must be obtained from the Editor. 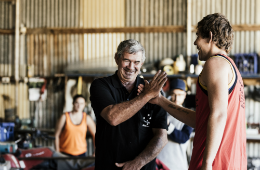 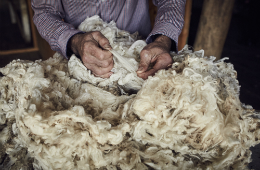 Clip Preparation
Preparing your wool clip is an important task that affects the quality of the wool clip and ultimately the final price receive. Read more 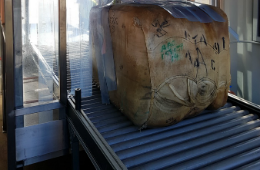 Post-Farm Biosecurity
The Australian wool industry had a robust strategy to minimise the potential trade impacts on the industry if an outbreak of an Emergency Animal Disease was to occur in Australia. Read more