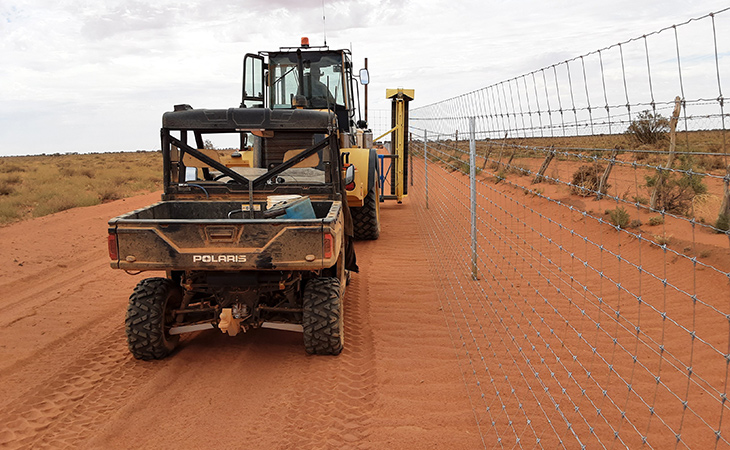 The second stage of the South Australian Dog Fence being rebuilt with the help the AWI-funded exclusion fencing construction unit. Note the old Dog Fence to the right of the new fence.

Innovative machinery owned by AWI that was used to build wild dog exclusion fencing in central Queensland is now being used by contractors working on the rebuild of the South Australian Dog Fence.

The 115-kilometre second stage of the $25 million South Australian Dog Fence rebuild began in November with cutting-edge equipment brought in from interstate to help deliver the project.

The AWI-funded exclusion fencing construction unit (EFCU) in Queensland has been used by woolgrowers in the Central West of Queensland. However, with about three-quarters of the potential exclusion fencing now successfully complete there, demand for the unit has declined significantly and AWI has therefore been able to provide access to the EFCU for replacement of the South Australian Dog Fence.

The Dog Fence protects South Australia's livestock industry by stopping wild dogs from migrating into land used for sheep production. However, more than two-thirds of the Dog Fence is more than 100 years old – it is ageing and brittle. Many sections have been degraded by kangaroos, emus, feral camels, wild dogs, weather events and sand build-up.

Federal Minister for Agriculture, Drought and Emergency Management, David Littleproud said the start of the rebuild of the second section was an important development at a time when agriculture remains central to the national economy.

“The rebuild will reduce wild dog management costs for pastoralists by up to $97 million and is estimated to increase income from sheep sales by up to $69.7 million over a 20-year period,” Minister Littleproud said.

South Australian Minister for Primary Industries and Regional Development David Basham said that, having completed 26 kilometres for the first stage of the Dog Fence rebuild, this next stage of the project will focus on 115 kilometres of fence from the corner of Curnamona Station and Billeroo West Station through to the NSW border.

“In the midst of a drought, the rebuild is raising the spirits of pastoralists whose sheep flocks have been severely impacted by the scourge of wild dogs,” said Minister Basham.

“Having a loader, hydraulic post driver and Ezy-Wire® spinner loaned through Australian Wool Innovation until 2024 is an example of industry working together for the benefit of South Australian pastoralists.”
- David Basham, SA Minister for Primary Industries

The commercial grade hydraulic hammer can drive the largest steel strainer posts. Two metre plus line posts can be driven into the toughest soils with ease. The Ezywire® spinner can be loaded with 3 x 250 metre or 2 x 500 metre rolls of prefabricated netting up to 1.8 metres wide.

The EFCU can run out up to a kilometre of fencing already strained to the correct pre-set tension before the spinner has to be reloaded. All attachments feature Caterpillar’s ‘quick attach’ coupler and can be attached and detached without leaving the air-conditioned cab. 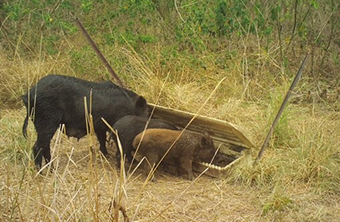 HOGGONE feral pig bait is a game changer
The number and range of feral pigs are likely to increase dramatically due to the recent wetter weather which has provided the pigs with plenty of feed and water. However, the launch of a highly effective and targeted new bait, HOGGONE®, will be a timely game changer in feral pig management. Read more

FeralScan™ celebrates 10 years of pest monitoring
FeralScan™ is a free resource that woolgrowers – plus other landholders, community groups and professional pest animal controllers – can use to record information about pest animal activity in their local area. Read more 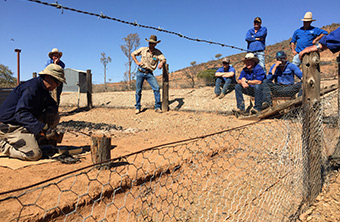