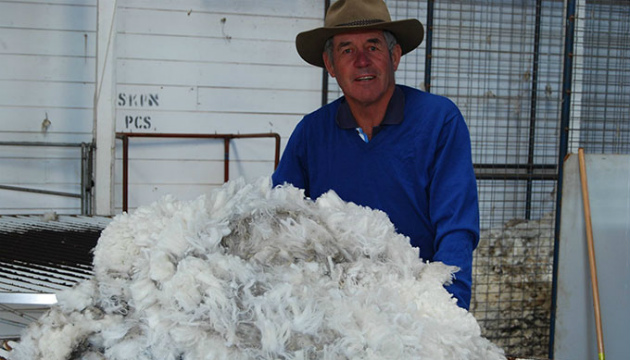 Tim Wright with his superfine clip at ‘Lana’.

By introducing time-controlled rotational grazing of his livestock, Tim Wright from the NSW Northern Tablelands has regenerated his landscape and business – increasing productivity while reducing inputs costs, despite the increasingly frequent and intense drought periods.

However, with the expensive inputs, the property barely broke even over a five-year cycle. In the 1981 and 1992 droughts, production records revealed that the improved paddocks had lower yields than the unimproved paddocks. The land was too susceptible to drought and profit margins were falling. Tim says it made sense to seek a change.

“When we went into the early 1980s drought, I thought we’d manage OK because we had full haysheds and silos,” he said. “But by the time the season broke, they were empty, our finances were under severe pressure and the land took five years to recover. It’s droughts that really knock woolgrowers over, not depressions in wool prices.

“We knew there would be droughts in the future and so we made the effort to learn a different way of farming. We were motivated by two key considerations: firstly, the excessively high cost of production, especially labour but other inputs as well, had to come down; and secondly, our grazing management needed to better utilise our livestock.” 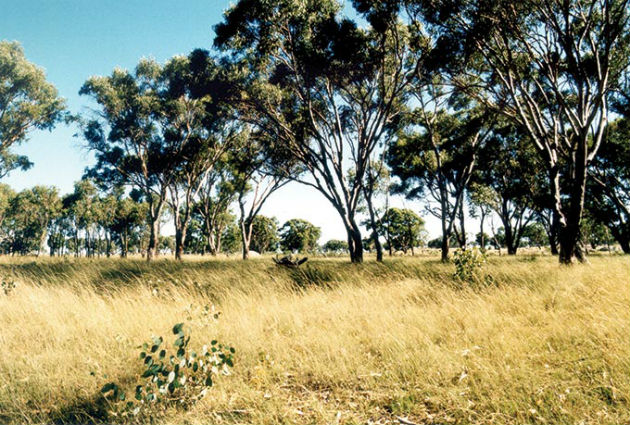 Open flats and drainage plains on ‘Lana’ with a healthy amount of regenerating trees as a result of planned grazing.
PHOTO: Nick Reid

In 1980, Lana was originally subdivided into 30 paddocks of generally 100-120 hectares, with varying grazing areas. Since 1990 these have increased to 350 paddocks, averaging 10-15 hectares. Pastures are heavily grazed for short periods, but for most of the time are in recovery phase. Each paddock gets an average of eight to ten days grazing per year, or two to three days grazing in each season. (During lambing, three paddocks are opened up at a time to reduce mis-mothering.)

“The short duration of grazing, combined with a higher stock density, results in a more even grazing over each paddock and a lengthy recovery period,” Tim said.

“It’s important to match stocking rate to the carrying capacity of the land. Pasture availability now drives stocking levels and rate of rotation.”

Cattle and sheep on Lana are grazed separately in a ‘leader-follower’ system. Cattle are generally grazed first for two days, opening up the pasture for the sheep and reducing the worm burden. Sheep then follow for two days. Intestinal parasite cycles have been broken by this rotational grazing.

The livestock’s grazing practices have driven the land’s fertility, which has increased pasture availability and quality, improving production – even with reduced rainfall and during times of drought. On average, carrying capacity has increased from around 8000 DSE to 20,000 DSE.

No hay or grain has been fed to the livestock since 1990. The only supplements that have been used are bypass protein supplement during drought and Himalayan salt for its minerals.

The grazing system has proved resilient in the face of the current drought which is the worst the property has ever experienced.

“There is still plenty of grass in the paddock for my sheep and it will respond well when we do receive some rain,” Tim emphasised.

Tim has destocked most of his cattle, but has kept his sheep. “Merinos are designed to suit dry conditions – the breed comes from Spain. They drink far less water than cattle.” 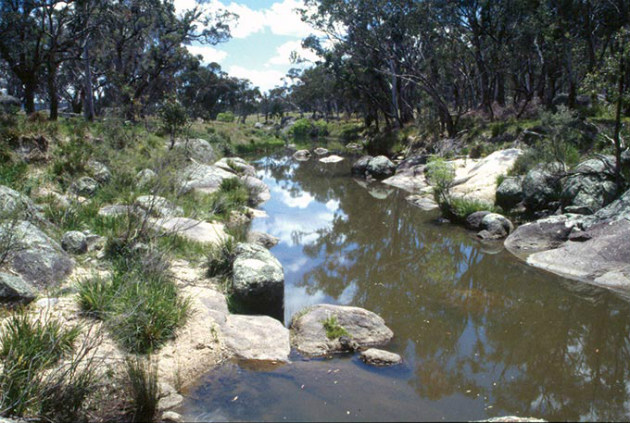 INFRASTRUCTURE WORKS WITH THE LAND

Tim says their network of paddocks is designed to suit the property’s topography and land.

“We fenced on contours to prevent sheep camps from developing on high ground and to spread nutrients laterally and more evenly. Soil organic matter content and fertility have been improved by this grazing action and the interaction of livestock nutrient deposits with soil biology.”

Each subdivision required about three quarters of a kilometre of fencing, costing about $1,500 per kilometre at current prices.

Heavily eroded watercourses were fenced off to heal, and weirs were constructed to stop head-wall erosion and divert water from watercourses onto the flood plains. However, the rotational grazing operations have also had a positive impact on watercourses, riparian zones, dams and wetlands.

There is now no erosion of stream banks. Regeneration of vegetation in riparian zones is increasing from natural seeding.

A water trough system was constructed to supply clean water to the new paddocks for the Wrights’ stock. This required installation of 3.5 km of 50mm poly pipe from one end of the property to the other, which mainly uses gravity feed from dams built high in the catchment and, in some cases, uses solar-powered units to pump from creeks to header tanks on high ground.

“We don’t need troughs in wet seasons, but they are a good drought standby. A mix of dams and troughs gives us the best of both worlds,” Tim said.

The new fencing and water infrastructure were initially funded by the reduction in other costs, such as fertiliser and hay, and abandoning pasture renovation. Increased production through the ability to raise stocking rates also covered the financing of the infrastructure.

However, Tim emphasises the cost of development is returned within two years.

“The point is you’ve got to spend money on infrastructure to get to the point where there is minimum input cost,” he says.

“I wonder how many people in this drought might have been better if they had de-stocked a lot more and spent their money on fencing and poly pipe, and less on feed. We need to put dollars into solutions not band-aid treatments.”

Grazing management has also significantly reduced vegetable matter (VM) in their wool. VM in skirtings has reduced from 9% to 2% since 1982, enabling Tim to decrease the amount of skirtings, increasing the main fleece lines and subsequently the overall value of the wool clip.

Tim has shifted to shearing every 8-9 months. “It seems to be better for the sheep and wool quality with less VM and cotted wool.”

Larger mobs enable more efficient management and generally require less human input except for key periods such as lambing and shearing. Permanent labour requirements on the farm have reduced from one person per 4,000 DSE in the 1980s to one person per 16,000 DSE today, significantly lowering costs to the business.

Importantly, it has also enabled the Wrights to have more time for off-farm social, community and consulting activities.

LIVESTOCK ARE THE FARM TOOLS

The Wrights show that stock can be used, in effect, as the farm machinery such as to transfer nutrients off sheep camps, and reduce weeds and intestinal worm infection.

“We use the farm livestock as the tools to enhance the land as well as them being a source of income,” Tim said. “The slasher is their teeth, the plough is their feet and the fertiliser equipment is in their rear. Stock density, the herd effect, and planned rest from grazing are as much tools as is a plough.”

Pastures are now altered by using grazing management and no chemicals are used.

“Our animals distribute nutrients across the grazed areas and build soil. The livestock spread native seeds through their dung and the increasing fertility of the soil becomes an ever-improving seed bed. Earthworms, dung beetles and other soil builders are critical to the development of healthy soil.

“Chemical fertiliser has not been applied for many years, yet our carrying capacity is increasing largely due to the smaller paddock size that results in improved soil biological activity brought about by greater animal impact.”

Pastures are no longer sown, and the property is managed for biodiversity, particularly of native species.

“We focus on having 100% ground cover 100% of the time so that soil is always protected, maximising the retention of available rainfall and extending growing periods during dry times. Softer soils also attract fertility and generate regrowth.

In the 1990s, University of New England researchers identified a four to five times increase in available phosphorus in areas that hadn’t been fertilised over a three-year period, along with increases in total nitrogen and potassium.

These findings confirmed improved soil health. The pasture is in recovery phase 95% of the time, meaning the pasture roots were growing deeper, drawing up previously unavailable nutrients. Also, more litter is being laid down, enriching the topsoil with organic matter and building soil organic carbon. The transfer of nutrients off the sheep camps also has a positive effect.

“Trees are an integral part of our ground cover and ecology,” Tim adds. “We encourage tree growth to extend shelter corridors and to provide habitat for wildlife.”

Tim believes that the innovative farming practices at ‘Lana’ could not have been done without acquiring an understanding of how the land ‘works’ and an increase in knowledge and skills development.

‘Lana’ is a wonderful example of how woolgrowers can produce quality wool and healthy profits while looking after and restoring their natural resource base. As a result of regenerative agriculture, the biodiversity and ecosystem functions at ‘Lana’ have improved, along with profits.

And with an increasingly variable climate, Tim can rest assured that much has been done to drought-proof the property – something from which other woolgrowers can learn.

“The threat of drought is always with us and we must plan that into our farming strategies,” Tim adds. “Old ideas of drought subsidies are not sustainable; it is farmers that must manage the impact of drought on their businesses.”