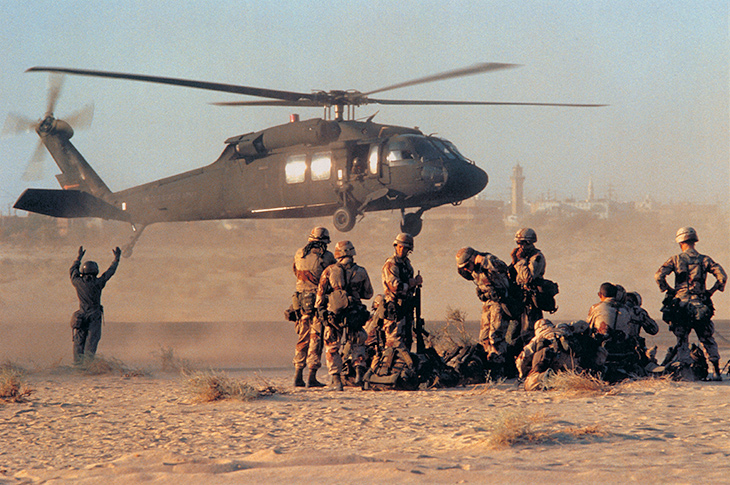 Considerably more severe skin injuries to military personnel in the Middle East (where battle techniques such as improvised explosive devices were used) occurred when synthetic base-layers were worn, compared to wool base-layers, as synthetic base-layers can melt onto the skin at high temperatures. PHOTO: Frank Rossoto Stocktrek

AWI has funded a new scientific study into the fire resistance of various fabrics used as base-layer garments for military and first responder personnel such as firefighters. The study concluded that the wool and wool rich fabrics in the study performed the best, while the 100% synthetic fabrics (polypropylene and polyester fabrics) performed the worst due to their propensity to melt and damage the skin.

From the Battle of Waterloo to the Korean War, wool’s inherent ability to protect the wearer from hostile environments, including extreme cold and fire, made it the military’s fibre of choice for outer layer garments. Nowadays, the military and first-responders are looking to base-layer wool garments due to the health and safety benefits offered by this ‘last line of defence’.

“This growing market demand for wool base-layer garments relates to the already well-researched benefits of superfine Merino wool, including its softness next to the skin, moisture management, breathability – and fire resistance,” said AWI's Program Manager for Fibre Advocacy and Eco Credentials, Angus Ireland.

The increased demand has in part been driven by the incidence of injuries to military personnel in the Middle East, where battle techniques such as improvised explosive devices (IEDs) were used. Considerably more severe skin injuries occurred when synthetic base-layers were worn, as they can melt onto the skin at high temperatures.

A review in 2017 by AgResearch of base-layer undergarments worn by the military, fire service and police first responders revealed that, worryingly, there are often no required specifications or test method standards relating to these important protective garments. This results in cotton or synthetic base-layers often being chosen by some military and emergency service personnel.

Some personnel choose cotton because it is the cheaper alternative and perceived as being a cooler option. However, there is the risk of large amounts of sweat/moisture building up in a cotton garment when worn in a layered system, which at high heat intensities increases radiant heat transfer and can lead to steam burns and increased levels of stress.

There’s also a trend for personnel to choose synthetic ‘moisture management’ (wicking) sportswear garments. The key concern with synthetic fibres (even flame-retardant ones) is that, when they are exposed to flame or extreme heat, they melt and drip which can result in molten polymer coming into contact with the wearer’s skin and burning it.

“In contrast, wool fibres are known to have a natural resistance to burning, even when exposed to an ignition source for long periods. This is due to wool having a high ignition temperature, high limiting oxygen index and its self-extinguishing behaviour,” Angus said.

“Wool fibres are known to have a natural resistance to burning, even when exposed to an ignition source for long periods.”
- Angus Ireland, AWI

AWI has funded a new scientific study, undertaken by AgResearch, to test the fire resistance of nine fabrics (see Table 1) used as base-layer garments for military and first responder personnel.

To enable a realistic assessment of the protection offered by the base-layer garments, a new ‘skin simulant’ test method was designed using fresh pig skin. The test method involved two techniques to simulate the skin’s exposure to, firstly, a naked flame ignition source and, secondly, an accelerant fuelled threat (such as an IED or petrol bomb).

Once cooled, the most visibly damaged area of skin for each test was sampled using an 8mm biopsy punch and examined by AgResearch using a microscope.

The results showed that the worst performing fabric was the polypropylene fabric closely followed by the three UK uniform polyester fabrics. 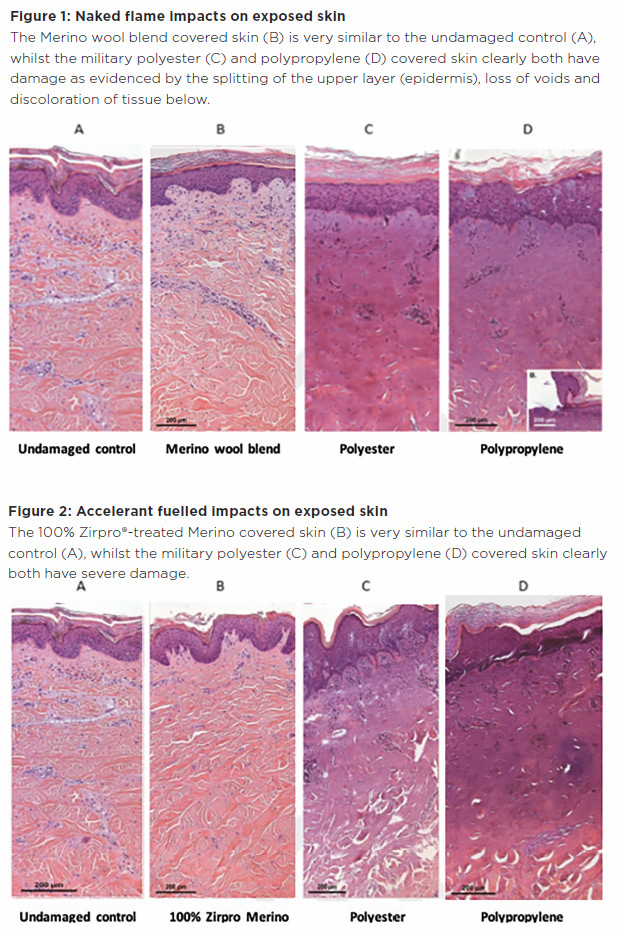 The fabric that performed best overall was the Zirpro®-treated wool (100%) fabric which showed no apparent differences compared to the undamaged control samples (see A and B in Figure 2), in both the naked flame and accelerant tests.

Angus says the results show that there is significant potential for wool base-layers to be used for protection as well as comfort by the military and emergency responders.

“This new test method demonstrated that while synthetic fabrics might be the most cost effective with regard to procurement, they offer very little protection to the wearer under the applied test conditions,” Angus said.

“It also highlights that an expensive fibre such as Nomex® is not the only option for protection, as the wool/viscose blend fabric of comparable density can offer the same or better level of protection.”

The results of this study, along with a detailed video, are being publicised by AWI in trade publications, at trade shows and distributed to partner brands (such as Aclima) for use in their own marketing.