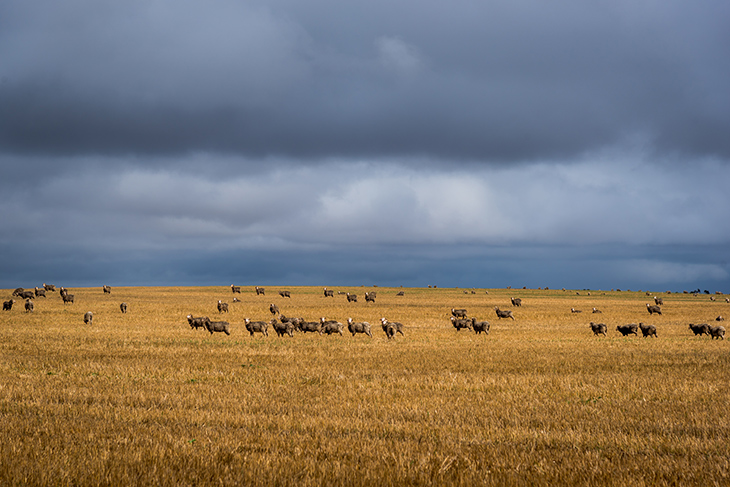 In many mixed farming areas of southern Australia, crop stubbles play an important part in feeding sheep flocks during summer. However, modern crop stubbles are notoriously variable in quality. A new guide for sheep producers provides up to date information on the nutritional value of stubbles and chaff piles of modern crop cultivars harvested with modern equipment.

The main feed value of stubbles is in the spilt or unharvested grain. However, the efficiency of harvesting crops has improved in past decades and this has resulted in stubbles with less grain. Furthermore, other factors such as new crop cultivars have affected the nutritional value of modern crop stubbles.

A project undertaken by CSIRO, with funding from AWI and MLA, has provided a new guide for sheep producers to the nutrition and management of sheep grazing modern stubbles in mixed farming areas.

The CSIRO research team investigated the current use of crop stubbles in mixed farming regions of WA’s wheatbelt. In mixed farms where stubbles are grazed, stubbles usually make up 15% to 25% of the feedbase. About 60% comes from green and dry pastures, and the remainder comes from forage crops, dual-purpose crops, perennial forage species, or supplementary feeding. The researchers found little difference in the feedbase between livestock or cropping dominant farms.

GRAZING STUBBLES IN THE FEEDBASE

Sheep grazing stubbles are highly selective and prioritise eating the high feed-quality spilled grains and any green pick when these components are available. Leaves and fine stems are low quality but generally edible, while ripe wheat stems are poorly digestible.

How the farmer prioritises the stubbles for grazing will depend on the type/class of livestock. Ewe lambs should be given access to the highest quality stubbles, followed by ewes that are pregnant or in preparation for joining. Older or dry ewes are grazed on lower quality stubbles, such as those that have already been grazed or wheat and canola stubbles.

Adequate nutrition is paramount for all the animals, so supplementary feeding could be required. In particular, producers should aim for any pregnant ewes to have a condition score of at least three at lambing to minimise mortality and optimise wool and meat production of their lambs.

Supplementary feeding can extend grazing of stubbles, both by helping reduce weight loss as stubbles become depleted and increasing the utilisation of low-quality stubble forage.

Sheep grazing stubbles will also eat mineral mixes, which can improve their nutrition.

The Grazing modern stubbles guide shows the nutritive value of a range of grain, hay and chaff, compared with the requirements of sheep for maintenance.

OTHER CONSIDERATIONS WHEN GRAZING STUBBLES

Ensure a decent water supply because stubble is a dry feed with typically less than 10% moisture content. A single sheep will require at least 3-5 litres/day when grazing stubbles, but more if it is provided a salt supplement or the paddock contains saltbush.

Sheep, and particularly lambs, that do not have access to green feed should be supplemented (drenched or injected) with Vitamin E to avoid white muscle disease. Alternatively, adjacent areas of perennial grasses and shrubs can provide a useful source of Vitamin E.

If sheep are being introduced to grain, introduce it slowly to avoid acidosis which can kill sheep. Alternatively, start by grazing barley or lupin stubbles prior to being moved to wheat stubbles.

Take steps to ensure sheep are not exposed to toxins when grazing lupin stubbles or annual ryegrass.

As well as filling the summer feed gap, grazing stubbles has advantages for the cropping side of a mixed business, including:

Although sheep cause some compaction while grazing on stubbles, it is shallow and transient and usually disappears after the soil wets again. Reduced water infiltration and yield from grazing is due to the removal of cover rather than compaction; light grazing has no impact on subsequent grain yields.