Mr Wilcox said that “The dry finish to the 2018/19 season in some areas resulted in further reductions in key wool test parameters since April. Average yield ended the season at 63.1%, down 1.5% on 2017/18 while mean fibre diameter was down by 0.5 microns to 20.5 micron and staple length was down 2.2 mm. The season ending levels of these three key test parameters are either at, or near, the lowest levels since the 2000/01 season. The fibre diameter distribution of the Australian wool clip showed a significant increase in the weight of wool tested of 18.5 microns and finer and a sharp contraction in the volume of 18.6 and broader wools.”

Table 1: Summary of wool production estimates and forecasts for Australia

The state and national Committees will next meet in mid-December 2019. 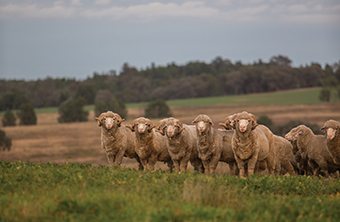 Rams
Rams are high performance animals that work very hard over the joining period. They contribute half of the genetics of their progeny and are the primary drivers of genetic improvement in a flock, so need to be given every opportunity to pass on their genes. Read more